Penfolds is one of the first wineries that I became completely obsessed with, over recent years this has become somewhat subdued, but was re kindled with my visit there in October. On the 28th October, the day started early with a helicopter flight over the Barossa Valley. The aerial view of the Barossa gave me a greater overall understanding of the area. 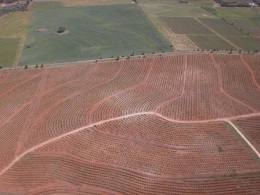 We were joined in the helicopter by Andrew Baldwin, Red Wine Maker for Penfolds. He noted the different Penfolds sites, the types of plantings and the soil differences from the air. The soil differences were most profound, from the lighter soils to the deep rich red. Once back on firm ground, we headed to the Kalimna Homestead for a tasting. The tasting was presented by Kym Schroeder, white wine maker for Penfolds and Andrew Baldwin. Kym went first, Kym’s father, uncle and brother all worked for Penfolds and in fact there’s been a Schroeder working at Penfolds for more than 50 years. Kym is very passionate about his white wine making and in fact left little time for Andrew at the end. 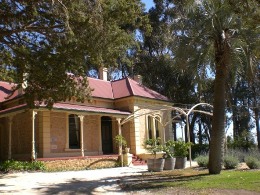 Throughout both the red and white tastings the experimental wine making theme, that is the foundation of today’s most iconic Australian wine, Penfolds Grange was evident. Alongside the commercial wines that Penfolds make, there’s plenty of small parcel experimental wines being produced, that may just be the ‘Grange’ of the future. We started the tasting with Bin 51 Riesling, from the 2008 vintage, 100% Eden valley, a very restrained style. Next was Penfolds Thomas Hyland Chardonnay 2008, often referred to as ‘Little baby Yattarna’ This wine would have to be one of the finds of the tasting, retailing for around $20, it’s very good indeed, when you note that anything that does not go into Yattana ends up in this wine, it’s easy to see why. We then went on to taste; 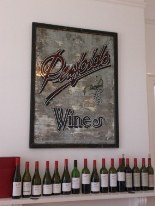 Following this amazing line up, when then tasted three more red wines (we needed more red off course). All three wines were from the 2008 vintage and highlighted the amazing colour and intensity that this vintage when released will deliver.
On the Saturday night we were lucky enough to dine at Penfolds Magill Estate.

I had previously eaten at Magill Estate back in 2000, at the time, the food was exceptional, very classic in style. A lot has changed, the food is still exceptional, although anything but classical. Executive Chef, Luke Stepsys presented a brilliant Degustation Menu, blending together local produce, classic technique and a lot of the new textural techniques coming out of kitchens like El Bulli. It was fascinating after having dined at El Bulli earlier in the year to see the techniques incorporated so well into a full degustation. 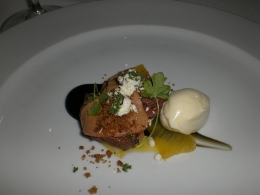 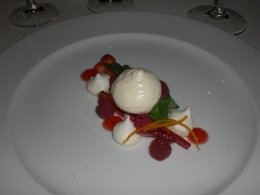 Penfolds Magill Estate is definitely one of the top restaurants in Australia and well worth a visit.