Vin Expo is an amazing event that happens every two years in Bordeaux, for me it’s four years since I’ve attended Vin Expo. As the exhibition attracts most of the wineries we import, it’s a great way to catch up with everyone and talk face to face – something that with the distance between us and our European wineries is not all that easy. So what did the first day hold for us? In trying to work out how to best describe it, this seemed appropriate, the day started with;

Vignerous de Caractre – Benjamin Laroche is working for this co operative, an interesting group, 80 families who have worked together since the co op started and all actually make their living from winemaking.

Next we were reminded there’s more to Lambrusco than sweet wine! The top wines are something to believe – I’m sold. More on these later.

Next, our Rugby mad friends from the Rhone – both loved their NZ Rugby hats – and are in NZ for 10 days for the World Cup – first up – Pierre Gaillard – we tasted (almost) everything ….

Next to the talented northern Rhone producer – Yves Cuilleron

Next to taste the brilliant bio dynamic wines of Josmeyer;

Almost enough wine? Not quite – after another meeting, off to catch up with our good friend Sophia from Quinta de la Rosa and Jorge, her talented winemaker over dinner; 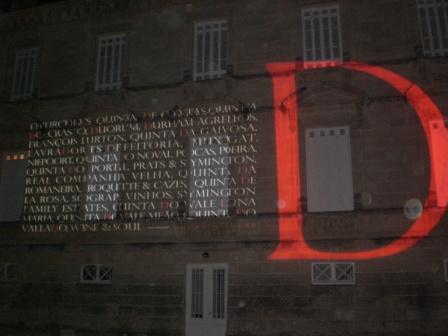 The dinner was held at Chateau Pichon Baron in Pauillac, the event was kindly put together by Christian Seeley from AXA, who manage Quinta do Noval in the Duero. He had gathered together about 20 top producers from the Duero at Pichon for unique experience during Vin Expo. When we arrived we were guided into one of the barrel halls at Pichon to first taste the 2008 wines from the producers. Wow, what an experience, we worked our way around the room, the Quinta de La Rosa wines displayed wonderful finesse along with the inherent power of this region. Jorge’s own wines under the label Poeira were also superb. We were treated to the 100% Touriga Nacional wines from Quinta do Noval and Churchills as well. After the tasting we headed upstairs and into the garden for pre dinner drinks, these consisted of the white wines and rose from all the producers. Tables were set around the edge of the garden at the rear of Pichon, all laden with food. There was a delightful collection of Portuguese delicacies – cured meats, fish and almonds to start. About 10.30pm, we were shown the way to a large marquee in the gardens for dinner; it was a very hot day and lovely to be sitting outside. The meal was a traditional Portuguese dish, that Jorge felt had been prepared with a French twist. It was a goat casserole with white beans, garlic and truffle.

Alongside dinner we had Quinta de la Rosa 2004 Reserve from Magnum and a selection of older wines from the producers present. For dessert we had an Almond tart, served alongside was a selection of ports from Quinta de la Rosa. The two Colheita were then served – 1997 – from Quinta de la Rosa and Quinta do Noval – a bold move from Sophia to present her 1997 for direct comparison. It was a far match; the pricing of the wines is worlds apart, the quality, quite close. Around midnight, our bus collected us and took up for the hour and half long ride back to Bordeaux –whilst staying awake was the aim, the jet lag started to kick in.

It’s great fun, this is the part of the job I love, tasting wine and talking to friends about wine.